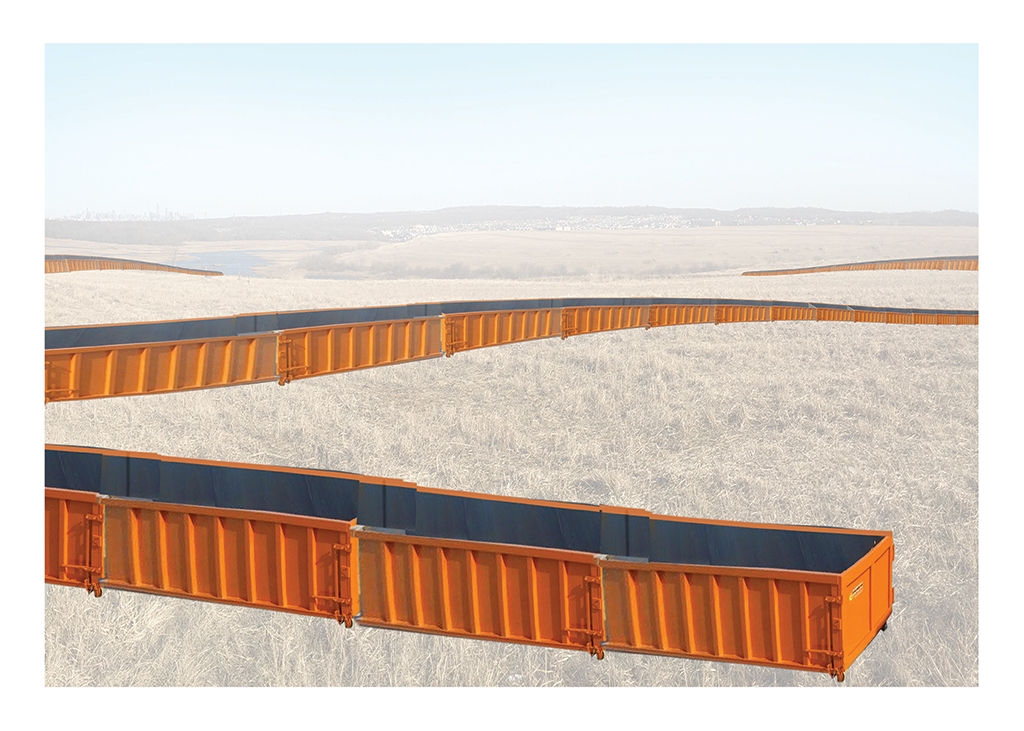 DUMPSTER VIEWING TOWER – A material acknowledgment of the sites previous life, this work gestures toward the action of disposal: dumpsters are tipped, on a tipping floor, and so freezing this action – the work of a dump – we can recall it. Functionally, this is a viewing tower- a vantage point from which one may see a more expansive view of the landscape, a unique perspective that can’t be seen from the ground.

DOMINOES – All of the remaining dumpsters on the site would be arranged on end, one after the next, through a portion of the park. They would then be tipped over, like dominoes, a cascading chain reaction across the landscape. Ultimately, this is a time based work, an event. The implementation, however, would be a massive physical undertaking. The gesture it wants to be is also massive, though ironically still a too small interpretation of the landfill or the landscape it is becoming.

CAMOUFLAGE – Considering the fact of the park- the success of turning landfill into what Freshkills is, and is still becoming – we see a natural landscape, generous in scale, almost rural, wild. it is openness in the surrounding density, built on top of and concealing the physical history of waste and refuse below it. two realities. the idea of these works is to clumsily try and ‘hide’ some of the remaining practical infrastructure of the site, while not actually hiding it at all. instead, we would create a double image: a gesture toward the past and an artificial version of the present, and future, of the site. nature masks.

FLARE STATION SCREENS – An obvious feature of the landscape still in use, the flare stations are necessary, and likely impossible to actually hide. Screens, artificial foliage, fake trees – the flare station would still be visible, but we are interested in the gesture of trying. It indicates a kind of ambition, or hopefulness; an echo of the project well underway at Freshkills.

WELL HEAD CAMOUFLAGE (TREES) – Well head camouflage would piggy-back on the existing well head positions. Artificial like the screens, these would mask the well head, but be conspicuous in the treatment: a plywood cutout of a crudely rendered evergreen. in reality, you would see both the ‘tree’ and the well, in varying degrees depending on distance and vantage point.